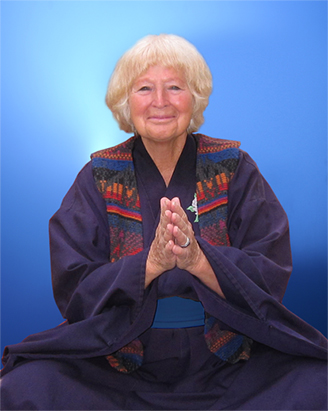 Maticintin, Wisdom Master, is a vessel of the Mind Treasure Teachings, gifted her by the Transhistorical Consciousness, meaning she attained enlightenment in another lifetime. Maticintin gained enlightenment, benefits from her Teacher the great Wisdom Master Padmasambhva. The Wisdom Master has a Doctorate in Logic and Buddhism and is the Founder and Leader of HÜMÜH: Jeweled Path of Living Wisdom, Clear-Mind Buddhism. The Wisdom Master currently Teaches at a variety of HÜMÜH Meditation Centers in the United States and Canada, including the HÜMÜH Dharma & Meditation Centers in Kingman, Arizona, and the Skycliffe HÜMÜH Monastery in Westbridge, British Columbia.

She also travels and Teaches at other locations in the United States, Canada, and occasionally, abroad.

Maticintin is a noted author with many books, among them a fresh, poetic rendering of The Heart Sutra, the illuminating Clear-Light Living Meditation, Vol. 1, Secrets of the Golden Spiral, which is HÜMÜH’s  Handbook for Enlightenment, as well as Shaman of Tibet (The Golden Dream),  Chod: Cutting Through Obstacles, and many other books (see HÜMÜH Store). She brought forth HÜMÜH as a new Buddhist sect in 1992 as an expression of the highest Teachings culled from all Buddhism to directly address the Western body/mind/spirit connection and lifestyle.

One of the manifestations of her dedication as a Spiritual Teacher is the Initiate Home-Study Program she has developed, which enables Initiates to work with her at a distance, as well as, through on-site retreats and classes. While keeping up with a year-round Teaching schedule, the Wisdom Master maintains periods of solitude in between working with her students and takes time to hike in nature and be in companion energy with a romping, sable-haired Victorian Pomeranian named Tantra, which refers to the rapid means to enlightenment.

The Lineage of Wisdom Master Maticintin

Toblarzt was one of Sakyamuni’s students. While traveling with the Buddha and his band of disciples, Sakyamuni’s life was threatened by a local governor who, out of jealousy, accused Him of crimes against the state. A troop of horses carrying the governor and his warriors came, with swords raised, into the Buddha’s camp. The other disciples who were there scattered in every direction, leaving Sakyamuni standing alone in the clearing. Toblarzt jumped in front of his Teacher, and using his body as a shield to protect Sakyamuni, took the blow of a sword meant for Sakyamuni. Sakyamuni held Toblarzt lovingly in his arms, unconcerned for what action the governor would take next. The governor was overwhelmed by the display of divine love and devotion of Teacher and student, and dropped from his horse to ask Sakyamuni’s forgiveness, and later became a trusted disciple. Toblarzt survived to become Sakyamuni’s heart-disciple, and was re-named Mahamaudgalyarana.

Mahamaudgalyarana later became quite spiritually adept in the Teachings of Sakyamuni and often journeyed into the cities and towns to teach the people on Sakyamuni’s behalf. He became impassioned with his work and was determined to convert a group of high-level cynical officials by constantly admonishing their words and actions. His arrogance caused the officials to fear his influence in the community and to hate him for being the cause of their belittlement. Consequently, they had him murdered as he was approaching a neighboring town to teach.

67 Lives. Mahamaudgalyarana had sixty-seven subsequent lives, forty of which were short-lived, resulting in his death before the age of twenty, and some of which were below the level of human consciousness, whereby he lived one as a vulture, one as a dog, and another as a cow. The remaining 27 lives were human experiences that further healed his prideful arrogant mind, during which time he learned modesty and humility. His benefactor in many of those lives was his admirer, the governor who threatened the life of Sakyamuni.

Dorje Dudjom was the last of the sixty-seven subsequent lives of Mahamaudgalyarana, during which time he met and befriended three spiritually devout brothers who were determined to build a great stupa in Kathmandu. It was a task that took years to accomplish. One of the brothers was exemplary to Dorje in many, many ways. This brother was the force behind the stupa and an upliftment to all the others, including the numerous townspeople who later lent a helping hand in the building of the stupa. The stupa is well known today as the Great Stupa of Kathmandu. The exemplary brother was later to become Padmasambhava; the other brothers to become the Indian Saint Santaraksita and King Trisong Detsen, who was formerly the governor who became devout to Sakyamuni, all three of whom were, in a later lifetime, responsible for bringing Buddhism to Tibet.

Trisher, an emanation of Dorje Dudjom, was minister to the King Trisong Detsen who invited Padmasambhava to Tibet to spiritually educate the people. He later became Padmasambhava’s disciple and attained enlightenment under the master’s tutelage in a dark cave outside the nearly completed Samye Monastery, after which he began the work of translating Tantric texts.

Longchenpa, an emanation of Trisher, became a monk at an early age. His studies of the Tantric texts brought to Tibet by Padmasambhava and Vimalamitra led to the synthesis of the mind treasures (memory of his relationship with Padmasambhava as Trisher) and the development of a coherent system of spiritual knowledge that could ready the already cultivated mind for enlightenment. He wrote over 250 texts that remain the fountain of recorded truth today.

Jigme Lingpa was born from the mind treasures of Longchenpa. Following his vision/memory of his former discipleship with Padmasambhava as Trisher, he set about to condense Longchenpa’s system to form a concise authoritative expression of the great perfection tradition.

Patrul, an emanation of Jigme Lingpa, took the Teachings he had long been translating and editing through the lives Trisher, Longchenpa and Jigme Lingpa and, following his mind treasure memories of previous incarnations, made the Teachings practical for the people to use them in their lives. He was famous for the direct way he probed into the depths of his student’s minds and often mirrored the faults they had hidden there to liberate them from the illusions of their mental imagery. Following his lineage would be the Teacher Maticintin called the Winged Wolf, whom Sakyamuni foretold Mahamaudgalyarana he would be.

Maticintin began her expression of the Primordial Teachings as the Teacher Wisdom Master Maticintin, foretold by Sakyamuni in his discourse to Mahamaudgalyarana about his future incarnations. Wisdom Master Maticintin founded HÜMÜH: Clear-Mind Buddhism, School of Ati-Yoga, which has Spiritual Study Groups for the public throughout the United States, Canada, and Australia, and established the 220 acre HÜMÜH Buddhist Monastery in British Columbia near the Washington State border and a HÜMÜH Meditation & Dharma Center in Kingman, Arizona. A 640 acre mountaneous parcel north of Kingman, Desert Wings, has been purchased to become a second HÜMÜH Monastery. 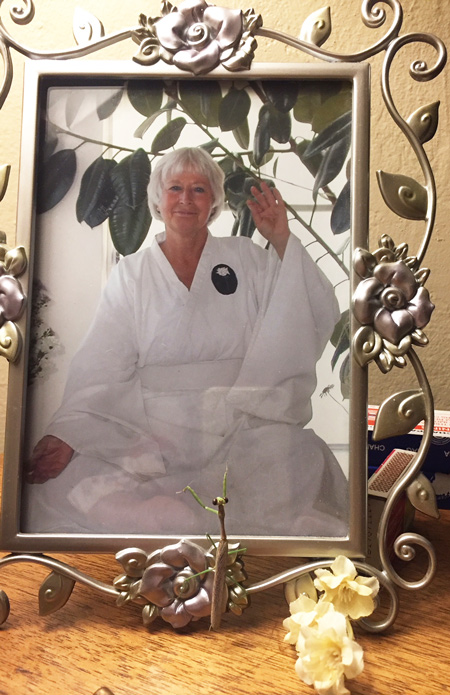 The Wonderful World of Bug Consciousness

The Praying Mantis in the photo entered an initiate’s home as she was opening the door to call her dogs, flew directly to the Wisdom Master’s photo and stared at it.

It’s natural to have some confusion about what an enlightened Master/Teacher is, so I’m going to give you a few guidelines so that you can better recognize such an embodiment.

So you can see, there are few spiritual Teachers who are actually enlightened.  I hope this helps you.

Copyright © 2020, Maticintin
Scroll back to top 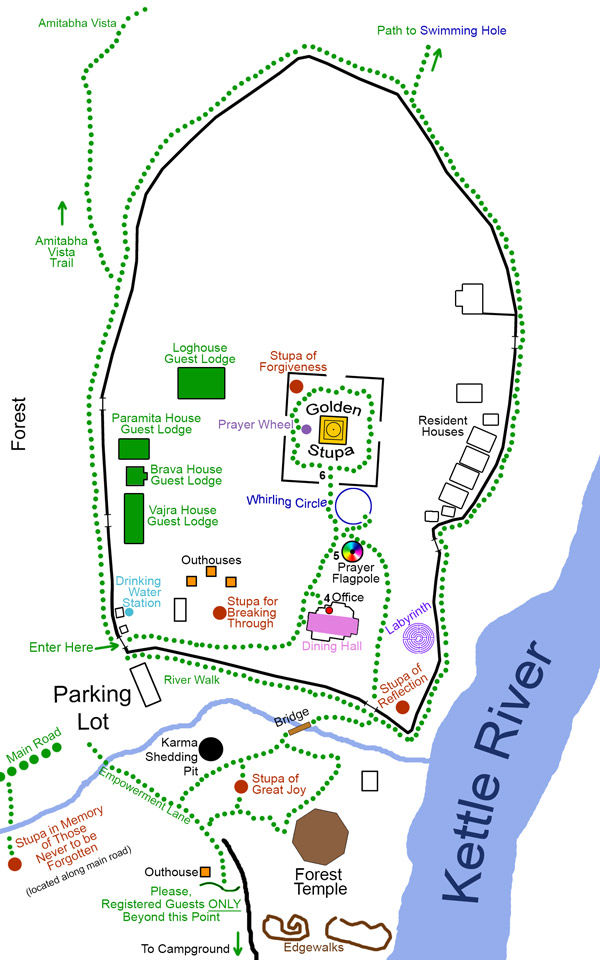